A while back my brothers and I started up Sound, Sight & Mind, a podcast dedicated to The Twilight Zone. While discussing and debating the series I rediscovered my love of the classic show, and, inspired by designers ranging from Saul Bass to Juan Ortiz, I decided to create posters inspired by individual Twilight Zone episodes, with the goal of designing one for each of the 156 original episodes. 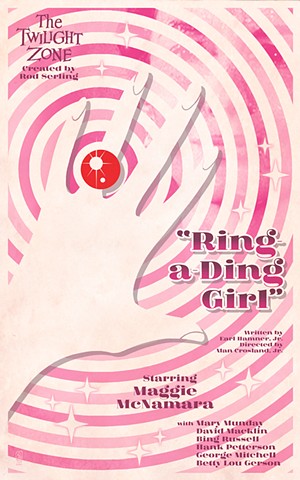 "Ring-a-Ding-Girl" has to be one of worst-titled Twilight Zone episodes, but I find this often overlooked story to be both intriguing and oddly moving. This design went through loads of changes-- at one point I had included a stylized, cartoon rendering of Bunny Blake, the title character-- but the one constant was the ringed hand with the radiating circles. Eventually I decided to focus on this and make the other elements more subtle. After I had completed this poster I saw Juan Ortiz's design for his Twilight Zone trading card set... and (of course) his design ALSO featured a hand with radiating circles! Oh, well-- I'll chalk it up to great minds thinking alike.