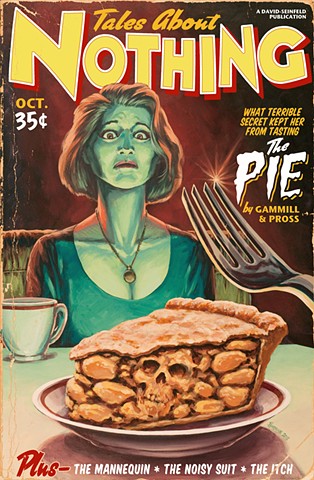 Tales About Nothing
Acrylic and Digital
< previous next >

When I was asked to take part in Gallery1988's tribute show to Seinfeld (arguably one of the greatest sitcoms of all time), the problem was that there was too much great material to choose from in creating my piece! I finally decided to focus on a single episode, "The Pie," wherein Jerry's girlfriend mysteriously (and without explanation) refuses a taste of his apple pie. I painted the scene in a pulpy tone, and enhanced the vintage mystery feel with digital text and distressing. The titles of the other "stories" in this magazine are the episode's subplots for Elaine, George and Kramer, respectively. Giddyup!